How to Run a Marathon (6 months after having triplets)

These days, you can learn everything you need to know about RNR New Orleans with a Google search, so for my 41st state I’m going to write something for anyone who loves to race, but feels strapped for time.

Here are 3 tips for marathon training as a working mother with 6 month old triplets + a 2 year old:

1. Choose a realistic training schedule
I knew there was no way I was going to be able to adopt a schedule that said “Monday x miles, Tuesday x miles”, and so on…our lives are pretty chaotic and I didn’t want to feel like a failure 2 weeks in. So, here’s what I did: 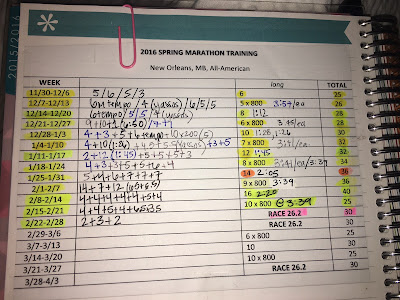 I committed to an overall weekly mileage goal with ONE specific long workout each week. However the in between happened was fine…and good thing, cause it varied widely. I traveled out of state for work in December and February. Our son was in the hospital for 10 days with pneumonia in January. Weather was all over the place. Even now that the babies are finally sleeping in longer stretches, it isn’t at the same time.

This approach could work for anyone with a decent grip on programming because, as evidenced by the above example, LIFE HAPPENS. I was able to stick to this schedule with minimum guilt; as a Mom, I already have enough of that.

2. Get buy-in from your spouse
My Husband, Trey, knows how important running is to me. It gives me a sense of personal accomplishment, keeps me physically healthy, and connects me to the people in our community. It is a very important part of my identity outside of motherhood.

There were a number of times I had planned a long run, something or other happened, and a Goodwin child needed attention. Trey was the first to say, “get out of here! Get your run in!”. He made mygoal a high priority. It could have caused a lot of tension (and let’s face it- the odds are not in our favor as a military family of multiples) but he truly bought in. 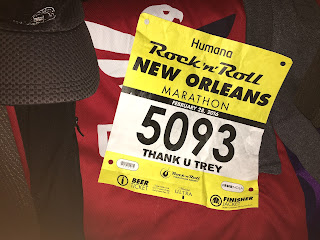 What if your spouse isn’t supportive? This is definitely something you want to work out (pun intended!). Marathon training not only consumes time, but also thoughts and conversation.

3. Get your mind and body on the same page
One look at my avalanche style splits will tell you I’m still working on this one. I bounced back pretty quickly after my first son in 2013 and right into Boston qualifying shape- not the case this time because it is a different case. 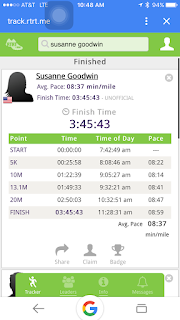 I gained 65 pounds during this pregnancy- more than half my body weight (but still under what the Doctors recommended, as Mom’s weight gain is correlated to birth weights for multiples). I had a c-section this time and am working through a pretty nasty case of diastasis recti (abdominal separation) from carrying 3 babies, albeit only to 30 weeks. It’s markedly better than it was when I began training in December, but let’s just say I can totally confirm all those Runner’s World articles about the role your core plays in running!

You can see from my schedule under tip #1 that this was the first race in a string of 3 for the Spring. If I’m coming out of this thing happy on the other end, I have to listen to my body. I just read in Mark Sisson’s Primal Endurance (not an affiliate link, just trying to be helpful!) that it takes as long as you were out of the game to get back to where you were. My last marathon was in November 2014 so by that logic, I still have a few months. Bummer for this very competitive runner, but also encouraging. Coming off an injury? Running shoes dusty? Could be something for you to contemplate, too.
That’s it! I don’t know a lot of other triplet marathon running Moms, but if you do be a pal and send them my way so they can tell me what I missed.
A few more pictures below. To God be the glory!
PrevPrevious40 Thoughts about my 40th state- NYC Marathon
NextMyrtle Beach 26.2 (just for fun!)Next

3 Tips from Ultramarathon Training You Can Use in a 5K

As many of you know I am training for a 100 mile race. It’s Blackbeard’s Revenge in late March so I’m currently

What does the minimum effective dose look like?  The training for my 47th marathon state was a self experiment to answer this